“Virtual Reality is the next major computing platform and transform the way we experience the world”, said Nicolas Zibell, General Manager of International Business and President of TCL Communication. 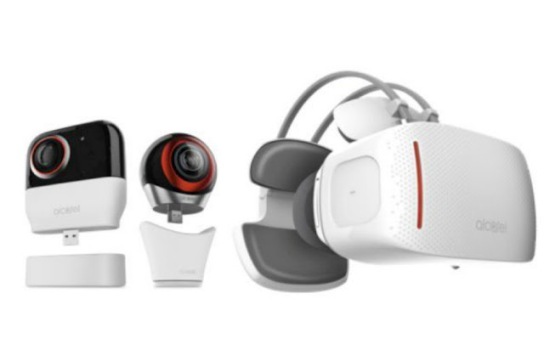 Therefore, Alcatel collaborated with Jaunt VR, Magic Interactive Entertainment and Fraunhofer, to offer pre-loaded content to Vision users. While, for those who enjoy video games, Vision includes Magic Interactive Entertainment’s BattleBlock, a combat game disc for RV from person to person. Vision does not need a smartphone or computer to operate. It also loads quickly; it is easy to use and has a 120 degree vision. In addition, Vision also adjusts to users with myopia, eliminating the need for glasses or contact lenses to use the device.

Camera 360
The Alcatel camera has an angle of 360 degree and comes in two models, both with two fisheye lenses 210 degree: a rectangular pattern whose size is half of a credit card, and a circular pattern with a size similar to a coin.

The plug and play Alcatel camera 360 is compact and lightweight, allow you to capture, visualize and share them instantly from your smartphone. You can even create original content for viewing on the Vision device or other virtual reality products.

In addition, Alcatel also said it partnered with 360 camera manufacturers: 360fly, ALLie Camera, Arashi Vision (Insta360 4K) and Primesom (Nico360), which offer resistance to shock, continuous use in indoors and even professional.

It should be noted that with the new Alcatael smartphone, IDOL4 launched this year, the company was the first mobile phone brand to include Virtual Reality. And now it is betting on new independent Smartphone products.

2016-09-03
Previous Post: Details about Huawei P9 camera
Next Post: 3 things you should know about the new PS4 Pro