An exoskeleton and virtual reality, combination to improve recovery from spinal cord injuries

Most of applications that until now we have seen for the exoskeletons were soldiers or workers that should load much weight as major recipients. But the field of health, people who have difficulty for walking, also has much potential. 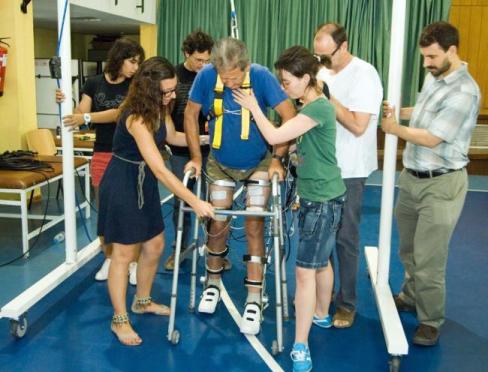 The European project Hyper is one of the most party intend to get these robotic devices. With a budget of 5 million euro, aims to develop rehabilitation programs affected by stroke and spinal cord injury using the combination of virtual reality and neurorobotics based on exoskeletons.

First prototype tests with 10 patients
Although the project has been running more than four years ago there are not many prototypes that are using effectively. One of the most complete is that enjoy 10 patients at the Hospital of paraplegics thanks to the collaboration of IK4 under the supervision of the CSIC.

The prototype for which it has proposed a longer term testing is based on the use of an exoskeleton that is responsible for monitoring the movements of the arm to adjust its position in real time with sensors that measure pressure in the area to naturally respond to movement commands make the patient. Addition also allows the patient to walk naturally.

To facilitate rehabilitation, the exoskeleton is used in a virtual reality environment that recreates situations of everyday life of the patient.

The use of this type of exoskeleton allows, in addition to a control with more precise data from the advance is being patient, a more immediate rehabilitation start after injury, an environment that can change and greater intensity in the exercise.