Create a rope bridge with drones is possible, and fantastic view

By: editor
In: Tech Gadgets
Tagged: Create a rope bridge with drones

Impressive use of the technology that made the guys from the Gramazio Kohler Research (Federal Institute of Technology Zurich). With a pair of drones, a few structures to every side, and a good ration of ropes, create a bridge by which a human being can go through from side to side. 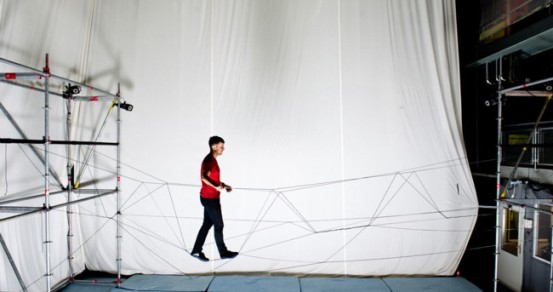 We do not stop to see practical applications with these unmanned flying vehicles, and when we find demonstrations as we share in the following video, make us think that we do not see more than the tip of the Iceberg.

With a drone can reach difficult areas, inaccessible to us and teach us what is happening there, we could say that is the most demanded feature. But we can also forget about their cameras and use them as tools of creation. In example, a pair of quadcopter mounted a bridge based on knots and braids with ropes:

Coordination and mastery of flight of the drones in such a confined space, such as speed, is worthy of note. The total path length is 7.4 meters, and the ropes used are Dyneema type.

Dyneema is a composite material reinforced with fibers in the aeronautical works, by its weight-resistance ratio: seven grams per meter and a diameter of only 4 mm can support up to 1,300 kilograms. For full preparation used 120 meters rope.

To run all the choreography has been created a workspace for drones called Flying Machine Arena. Plagued by motion capture systems and exact location of the vehicles and components, information can get to a brain that is outside of the drones, and that is the one that orders the commands to realize in every moment. No wires involved, there is already enough with ropes.

Before construction begins, the system performs a study of the situation, looking for anchor points, possible connections, and creates the fabric completely autonomously. Once in functioning to highlight that the drones are provided with a system motorized to release the rope, to be performed with maximum possible voltage.