By: editor
In: Auto Tech
Tagged: future characteristics of the Google car

I think that it has become clear that the investment in autonomous cars is the future, as demonstrated by the major government investments, for example the United States, as well as the active participation of various manufacturers and technology companies jumping on the bandwagon, with the idea to start developing its own system of autonomous car. 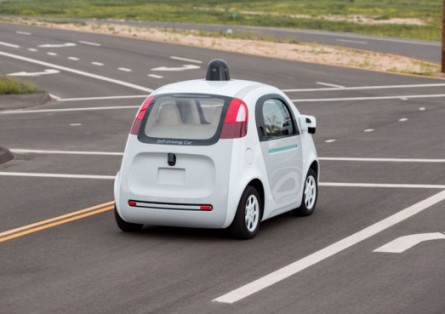 Google is one of the pioneers in this segment, who today are the most advanced in this area, where their car has already traveled several miles on public roads, of course have had accidents, and even it has been stopped by police. But this means that testing continues, this with the idea of improving systems and design, where now there are new data that tell us about the addition of a wireless charging system.

We do not handle it and now neither will be charged
Since we learned that Google was working on creating a car, everything concentrated on the factor that will “self driving”, they never specified whether it would use gasoline or be electric, but always handling between comments the version that it would be electric, without confirming the system that would be used for this purpose.

Today, the guys at IEEE Spectrum have had access to the documents of the Federal Communications Commission (FCC), where there are specified future characteristics of the Google car, where the most interesting is that it will have a charging system by magnetic induction, which will be manufactured by Hevo Power and Momentum Dynamics.

The idea of this system is to have energy transmitters embedded in the pavement of the various roads and zones of the United States, while the car will feature an induction cooktop at the bottom, which will serve for energy without the intervention of the user.

The reports mention that Hevo Power and Momentum Dynamics have already installed several of these systems in some areas of the Google headquarters, as well as ‘The Castle’, the facilities of a former air force base where Google does various tests to their cars.

The idea of using this system both in streets and in cars, is to use smaller, lighter batteries, which will help with the manufacture and installation of other systems, such as security, such as sensors or cameras, in addition to reducing the final price of the vehicle, not to mention the benefits of not be thinking of charging the car every day, as this system could be purchased to fit in the office or home in a simple manner and are complicated installations.

2016-02-06
Previous Post: LDRIC is a mimic robot of Tiger Woods, the first to do a ‘hole-in-one’
Next Post: Tips for designing mobile apps