LDRIC is a mimic robot of Tiger Woods, the first to do a ‘hole-in-one’

By: editor
In: Robots
Tagged: LDRIC

Tiger Woods called Eldrick, this is its real name, and it is very similar – phonetically – which have put the robot protagonist of our history: LDRIC. In common with little more than give the golf course, no amorous or large advertising contracts, but when it comes to sports, it is an ax. 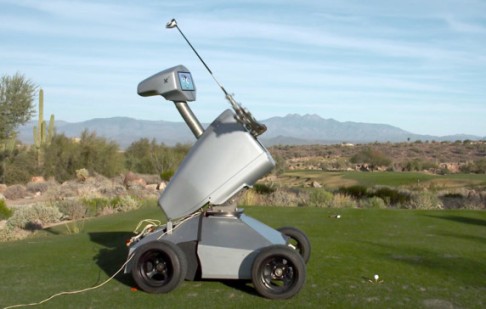 Don’t know how you will lay this for the golf lovers, but here we have the first robot that makes ‘hole-in-one’, that is to say, put it into the hole with a single blow. It did so on the hole number 16 of the Waste Management Phoenix Open, in Arizona. Just a month ago Francesco Molinari did the same, and we have to go to 1997 to find that Tiger did the same, in the same place.

LDRIC (Launch Directional Robot Intelligent Circuitry) was created by Gene Parente for the company Gold Laboratories, and have enlisted the help of professional golfer – and commentator – Gary McCord. We are going to re-live in video through the moment of the exploit:

Unfortunately we do not give too many details about the technology used to determine the position and strength to use, just know that it is not perfect, to get the hole-in-one had to make five attempts.

We would not be surprised to start seeing golf competitions with robots, its creators would not have that to get tired beating. In addition, with the size they have and their ability to move around the field, they might even take over the owner.