You see, he is able to recognize you and, if by then you have not scared, Han would be able to establish a first contact with you. This development of Hanson Robotics has been presented to society in Global Sources Electronics Fair in Hong Kong and from there has amazed us his ability to recreate human expressions. 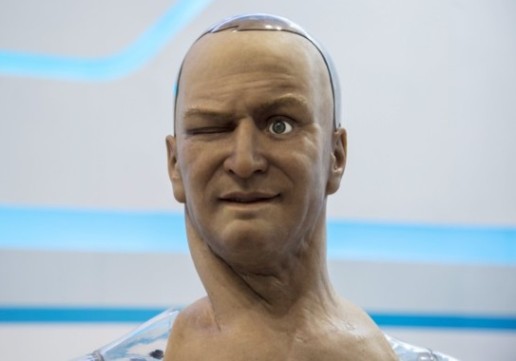 Han has based his huge resemblance with humans in the special rubber that gives shape to his face and that is controlled by 40 individual motors. Each face or expression can be controlled from a smartphone, but this humanoid robot is also able to observe him and imitate you thanks to cameras that includes within its false eyes.

Han combine images from several cameras scattered around his torso and two eyes, with software that recognizes who is in front and can pass to imitate his expression, or even to start a simple interaction with him. The starting point of this interaction with a human is maintaining the look and the ability to respond to expressions of people with very realistic and complementary gestures.

If we are sad before him such as Han can recognize this situation and join with a sad face while maintaining a conversation based on programmed responses and selects the system of integrated voice recognition.

To see that what we tell you is completely real, here a video where one can see up close the impressive looking and realistic face of this robot:

The marketing of Han will be this year, and will not be alone. It will accompany a robot with feminine face. Both will have their first real interaction in environments such as hotel lobbies, museums and casinos, companions for the elderly and integration into learning environments and educational.

2015-04-17
Previous Post: Shared Hosting Vs VPS Vs The Cloud!
Next Post: Sony Xperia Z4 takes its first steps in Japan