By: editor
In: Games and Consoles
Tagged: virtual reality goggles for Xbox One

The company also showed its own project Oculus Touch of proper controllers with developing prototypes has named Half Moon and designed specifically for the user to interact with objects and people in a virtual reality. 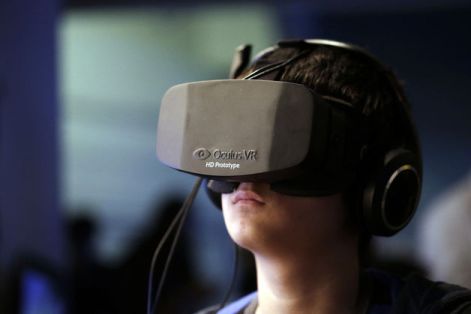 “With Oculus Rift have been able to fulfill the dream of the virtual reality”, said the CEO of the company, Brendan Iribe, in his presentation in San Francisco, where he ventured to predict that the arrival of this technology will represent “a paradigm shift” in the video game world.

“For the first time we will be in the game. You can teleport to a new world”, said Oculus VR manager who insisted that with this system will have to “convince the brain” that the experience we are living “is not real”.

Oculus Rift, reminiscent of a Ski goggle, it becomes “like a baseball cap”, Iribe said, and is equipped with two adjustable OLED displays, includes headphones (although you can use other) as well as an external device to detect movements. This system, which can was used on a pair of lifetime, will be sold with a command from the Microsoft Xbox One console as part of a collaboration agreement between the two companies confirms the predilection of Oculus VR by the Windows ecosystem.

“Include a control was critical” said Iribe to describe the needs of Oculus Rift. The head of the division of Xbox, Phil Spencer, spoke briefly of the compatibility of Rift with Windows and explained that it will be possible to enjoy Xbox content on these glasses, as already happens in computers and mobile devices with this operating system.

The Association of Microsoft and Oculus VR adds even more interest to the E3 trade show, the sectoral meeting of the world’s most important game of the year to be held in Los Angeles next week. Microsoft has its own glasses of augmented reality, The Hololens, but so far its rival Sony seemed to take the lead in virtual reality system with its Project Morpheus already expected by 2016 and will be one of the key pieces of its participation at E3 this year.

Oculus VR today spent much of his presentation to the content, the main problem with that are all new hardware to attract users, and announced that it will invest $10 million to “accelerate” the development of games for this platform.

The company today unveiled eight titles for Oculus Rift, none produced by the leading manufacturers in the sector, ranging from simulator spacecraft “Eve Valkyrie” to the third-person adventure in Antarctica “Edge of Nowhere”. This collection will be available for the launch of the glasses in 2016 is a sports game, “VR Sports Challenge”, a first-person shooter, “Damaged Core” and other titles such as “Chronos”, “Lucky’s Tale” and “AirMech VR”.

Oculus Rift software consist with a boot menu with access to a library of games and a section to interact with friends on that platform without removing the device, whose creators reiterated that it is ergonomic and lightweight. The founder of Oculus VR, Palmer Luckey, spent the last few minutes of the event Oculus Touch, a product in which the company has been working in secret and which is intended to facilitate the use of the gestures of the hands in a context of virtual reality.

It consists of a pair of knobs that seem to “joysticks” wireless equipped with various buttons and sensors to detect the position and movements of the appliance in the environment. “It is a virtual hands”, said Luckey that explained which will allow to make gestures in the context of virtual reality and interact with objects to, for example, pick up a weapon in a game. Luckey not made any demonstration prototypes but visitors to the fair E3 if may have the opportunity to use in conjunction with a test software called Toybox.