Although his role as manufacturer of building blocks or parts kits for children and adults is the best known of LEGO, the manufacturer was among the first who brought the teaching of programming among children with Lego WeDo. At CES 2016 they have been presented as necessary and expected new version of its robotics kit for younger children, a fixture of any shopping guide such kits for children. 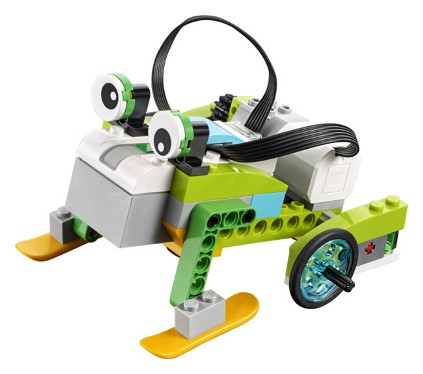 Lego WeDo 2.0 maintains the base of the first version with its education system based on building block, sensors, actuators and a visual programming language. The main novelty of this version is the arrival of the bluetooth communication with our iOS or Android tablet (also compatible with PC, Mac and in the future with Chromebook) to send the instructions programmed into it through a visual and designed software for elementary students.

As a transversal content programming
The new Lego WeDo kit also improves all its components, from the “brain” to the motors, sensors and actuators. There are now 120 elements rather than the first version, up to 280 pieces of kit. As a new Lego poses for subscriptions centers that include everything needed for a middle class by $2,000.

As already happened with the first version of WeDo, the value of the kit is not everything in the hardware, since there are already similar and more affordable solutions, but in the recognizable design of LEGO parts and related materials provided by the brand.

In this WeDo 2.0 a curriculum is not missing for 40 hours of lessons on programming that this year they are extended by parts dedicated to the called blocks of STEM (materials of science and technology basically), which is working with derivative projects that introduce the students to the facets of engineering, biology, physics or ecology. In total there are 16 base projects.

2016-01-04
Previous Post: Toyota working on a mapping system based on autonomous cars
Next Post: Pregnancy Pro is a pregnancy test that can connect to the mobile via Bluetooth