MisterBrightLight is a table that goes up, down, and shows our States of activity

A lot were taking to appear clones, or similar projects appear to Ikea Bekant, that indeed, certainly has not been the first to allow this same table serves to use sitting or standing, but it is that has put it on the market clearly appear.

MisterBrightLight allows exactly the same, but take the opportunity to put more technology and functionality in the same space. That said, the table has a motorized system to raise or lower the height and propose different forms of use, and in the end, seek a rest to eternal postures to which we submit to our bodies. 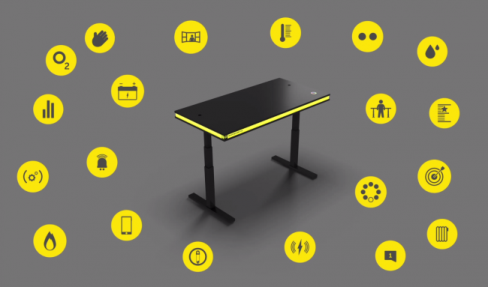 Showing our moods and activity
For the first comes from the design, with a light that surrounds the edge of the table, and it is possible to change color by touch. The idea is that light is informative, telling others that you are very busy – for example, red light – or open – green light – to which come to bother me.

The second thing has to do with the discipline of rising and lowering the table as it is accompanied by a mobile application – for now iOS – that reminds us when is the best time to make changes, and even informs us of the calories burn.

Its take advantage to put a social component or competition with the activities of the table, sharing our progress in a thing as simple as standing. The truth is we do not see him much interest in it, but there it is.

Sensors, battery and wireless charging
The third added to highlight has to do with sensors, since the table can record the temperature, oxygen level and humidity is in the air. From them on the phone notifies us that it is time to open the window, ultimately, change the conditions of the room.

The last thing, and not least in the case of a table, has to do with loading devices. MisterBrightLight incorporates a surface which is actually a wireless charger (do not know the standard used).

In option, there is a battery to be included within the table, and give 12 hours of power without the table is connected to the network. It is also interesting to note that the table surface, wood, can be personalized with up to 588 colors.

How much is the invention? For MisterBrightLight is not an affordable product, in fact it seems quite expensive, costing about 2,700 euro, which change depending added options.

For those who are curious, it is a Dutch product created by Marcel Demper and Wilfred Romjin.

2014-12-06
Previous Post: A bracelet wants to have the phone in our skin
Next Post: A jacket that charge our phones? Tommy Hilfiger bet for it