Ogo is a wheelchair that can move without using hands

Engineer Kevin Halsall wanted to help his friend Marcus Thompson after seeing how, after becoming paraplegic after a skiing accident, was no longer able to move freely and be able to interact well with others by the low mobility of current wheelchairs. It was then when it happened to create a more modern and better adapted chair. 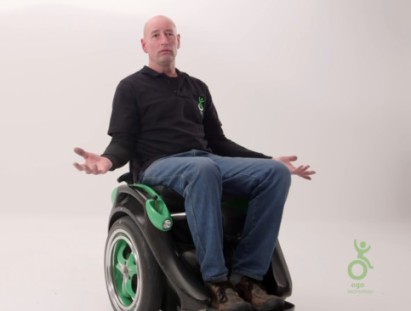 This chair is called Ogo, and its most striking feature is that it has a control that can be used without using the hands. Instead the user only needs to shift their weight to the side that they wants to go, and the chair will respond to move in that direction offering greater freedom of movement and interaction to leave your hands free.

According to the Halsall himself, the more it meandered into the world of disabilities more aware was neglected that were the people who were suffering. These people needs were to be able to make a normal life which was giving ideas that developed the prototype of his wheelchair.

Ogo is controlled by the movement of the weight of who is on top, but also has a joystick to move to more accurately and some handles on the sides for people without control over their abs can be tipped sideways to use it. It also has a hand brake to perform tasks without fear to bend and cause unwanted movement.

The chair has inclination of 30 degrees, and the remains when they are up and down hills so that the control system is not affected. It can also move faster so that disabled people can have fun, and its lithium battery gives you a autonomy of 40 kilometers which will have to practically all day. Having a free hand will also allow users to better interact with their surroundings and even back to mowing the lawn.

Ogo wheelchair is currently in pre-production, and its creator hopes to soon end models in the street. In regard to price, Halsall says that it is still early to venture to give one, but try chair to be as economical as possible because its intention is to be able to help others.

2015-11-01
Previous Post: Lenovo renews its hybrids and all-in-One with Lenovo Yoga 900 and 900 Home
Next Post: Google autonomous cars detect if there are children nearby to drive more cautiously