We spent some time trying to fulfill our dream of being able to develop systems with artificial intelligence, so that we have deduced which are essential algorithms to achieve. The key is to get a system to be able to learn and create new knowledge through deduction and reasoning. 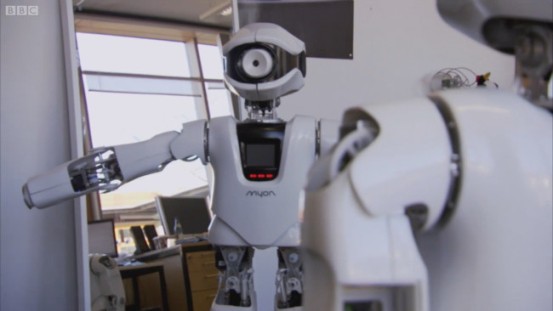 Myon is a modular humanoid robot being developed by the Beuth University of Applied Sciences in Berlin and is one of many with which it is trying to develop a learning system that will help not only to recognize himself in the mirror but also to communicate with their peers to be able to create and develop their own language.
This robot has already jumped to the headlines of the international press thanks to their operatic skills. But more interesting still is see how developers are using it to perform a series of experiments, which seek to the robot to be aware and be able to interact on their own initiative with what surrounds them.

Self-recognition and creating words
As we see in this report from the BBC, one of the first steps to make “smart” this robot is to put in front of a mirror so he recognize himself. So he can learn how his own body works which are seeing the results of the actions executed to move. This is essential, because as explained by one of its creators, be able to recognize these movements will help him interact with things around.

Here we see Myon is also able to use what he learned about his movements to interact with others. This is proved by putting two models facing each other, and simply letting them talk and communicate with each other.

Nobody knows how to call a particular movement, so the first to speak a word invented to describe him and says to another for execution. This one does not know the meaning of the word, so he makes a move to see if his partner relates to that. The fellow shakes his head to show that it is not, and makes himself the movement to which he refers.

This leads to both have created a word, the first in their own language, and both know what the meaning is. You could say that it is very similar to that of a small child learning system, and perhaps the first steps to begin to develop artificial intelligence. Although it remains to be seen how far can go with this way to learn from the other.

2015-10-04
Previous Post: The Toshiba Chromebook 2 updated with better processor and backlit keyboard
Next Post: Harvard wants to use ultraviolet light to repair the heart without surgery