By: editor
In: Robots
Tagged: Sepios

Under the water and especially when we are talking seabed, the ship propellers are not exactly a good idea to respect the marine ecosystem. The solution is back to nature itself. 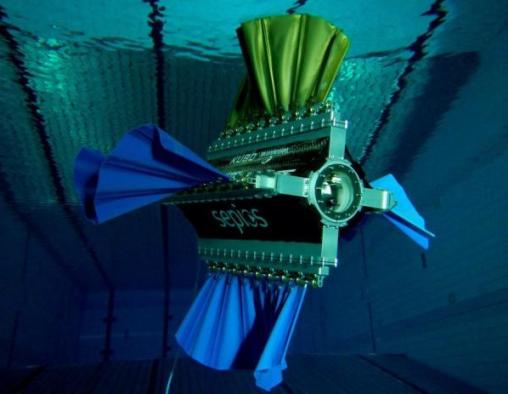 Sepios is a robot that has proved capable of mimicking the way to travel by sea squid. The name of its creator is Pascal Buholzer and with students of the Institute of Technology in Zurich in Switzerland have created this swimmer robot with fins that allow you to move without affecting the vegetation around.

It is also an advantage for future designs of propellers that its operation is virtually silent and also symmetrical, which gives it a margin of maneuver and accuracy of movements more than interesting.

Aside that this design can be taken into consideration for boat propellers, the exploration of the seabed falls within possible uses of this robot, which is testing a system of cameras and sensors (humidity, pressure …) that allow video output while avoiding obstacles that can be found on their journey through the depths of our seas.

2015-01-20
Previous Post: The next Apple project could be a camera for action according to this patent
Next Post: A temporary tattoo for diabetics expands the possibilities of telemedicine