An airplane bathroom that cleans itself? The dream of every traveler is to become a reality

All (or most) know the scene, full airplane and for some strange reason everyone wants to use the bathroom at the same time, resulting in an endless line, but when our turn comes, we face a small room full of, let’s say it politely, remains of the other passengers, which makes using the bathroom is one kind of litmus test to our immune system. 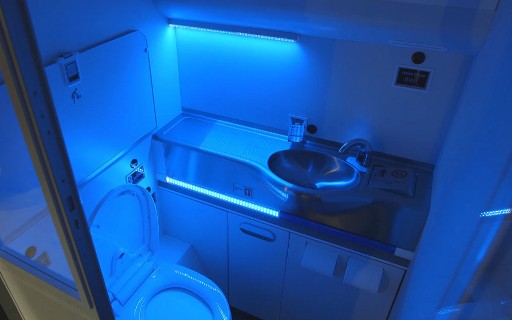 But now we could be facing the first big breakthrough in health in aircraft bathrooms, as Boeing has just introduced a bathroom prototype, which is equipped with technology that will make us to access more of the cleaning devices without even touch them, but the most interesting is that this bath will be able to kill germs. Is it sounds amazing: right?

UV light to kill 99.99% of germs
The idea of Boeing is extremely simple, as this small room would be equipped with ultraviolet light capable of removing up to 99.99% of bacteria and germs that remain after use of this bathroom; according to Boeing, only it would take three seconds for the light to do its job of cleaning, where of course we are talking about the germs that are in the air, because this light is not able to clean other disasters.

Another element that would integrate this bath is a system of sensors, which serve to activate the toilet, hand dryer, soap and water, and other functions, which will help us to not have to touch absolutely anything in this fourth, and this way we are not exposed to these germs.

This is just a first prototype, where Boeing has not yet released the names of the companies that collaborate with the development of technology, which have already advanced, it is that several airlines are interested in adding this type of bathrooms to their current fleet, which certainly is good news after seeing designs and patents aeronautical seeking to travel in economy is a survival experience.