How to create, search and send GIF in WhatsApp

The arrival of GIFs to Twitter last summer was quite a revolution, and the most used messaging service in the world, WhatsApp, seeing the success and engagement of the animated images that are reproduced in loop, joined this trend and introduced them in one of its latest updates. 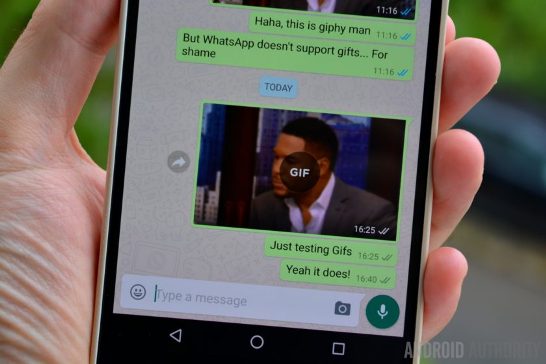 So if you have version 2.16.41 (or later) of the Android application you can create GIF from videos and send them to your contacts.

Of course, for GIF to work, both the receiver and the sender must have updated the latest version of the application. WhatsApp will not allow the sending precreated GIF; it will allow users to create them from the videos that they have on the mobile phone, trimming them and sending them as an animated image file.

These images, created at the end of the decade of the 80’s, are short files that have become popular in recent years thanks to its immediacy, simplicity and brevity. These are able to communicate a lot with little, and this has managed to engage people. In WhatsApp do not last more than six seconds. The novelty of WhatsApp this 2017 is the expected search of animated GIF.

Thanks to the new app update, Android phone users will now be able to search for animated GIFs within WhatsApp. So far only iOS users could do this (since November), while Android users could only send the GIFs they had stored in the memory of their devices. Accessing this search engine is very simple.

How to access the iOS and Android search engine
With the new update you can find and share GIFs without leaving the application. Although if you still do not have this update you will have to access the beta version, that can find on the official website of WhatsApp. This version also allows you to send up to 30 images by WhatsApp simultaneously, instead of the current 10.

To access the search engine in iOS we must open a chat window, then click on the ‘+’ symbol and select ‘Photos and videos’. Then we will choose GIF in the left bottom of the display.

How to create your own GIF
As we said at the beginning, users will also be able to create their own animated GIFs through the application. To do this we will open a chat window with the person to whom we want to send the animated GIF, then we will click on the upper right of the screen where you find ‘Attach’ and click on ‘Camera’; press ‘Video’ and then record a short clip.

A screen will appear to trim the video. We will click on the camera, the icon will change by one with the word GIF and finally we will send it.