If Apple has filed a patent for a device having the characteristics of a stylus, this is not the first time that the company made ​​a deposit for such an accessory. The patent, filed with the United States Patent and Trademark Office (USPTO), and spotted by Apple Insider, is a “communicative pen” that allows the user to write on a surface – be it a piece of paper or a whiteboard – and then transmit the information collected to a digital device such as an iPad. 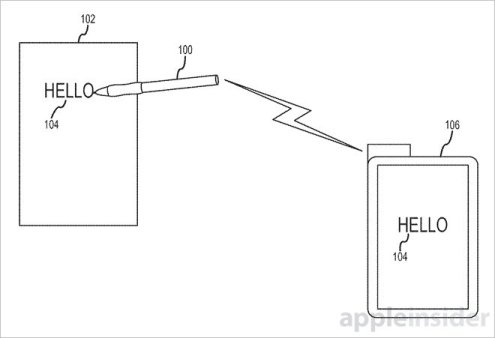 The stylus, logically named iPen, will use sensors and accelerometers, and will transmit data through wireless connectivity on the tablet or other device. Of course, this is not the first time that this kind of smart pen is invented, and probably it will not be the last either, but this is a first for the Cupertino company.

In the patent application, approved in late December, Apple notes that the stylus can be used in a classroom with a student who is taking handwritten notes, and a digital version of those notes are automatically replicated to the smartphone in his pocket.

While the pen may have an internal storage space, scribbles may be stored before being transmitted to the digital camera coupled after a certain period of time, or when a certain amount of data has been collected. But, as pointed out in the patent, the data can be transmitted on the fly, allowing to display and measure notes or drawing which are written on a nearby surface.

In the patent, Apple says, “it should be noted that the use of multiple accelerometers may allow the pen to track the movement in three dimensions instead of following only a movement in two dimensions”. In other words, you may also be able to draw in the air.

Although patent may not be will emerge, it could possibly be an essential accessory for the presupposed iPad Pro from Apple, expected to be unveiled this year. Although Steve Jobs did not see the value of such an object, the attraction of the Samsung Galaxy Note range may prove the opposite …

2015-01-04
Previous Post: This Winter, Protect Your Nexus 6 With A Customizable Skin
Next Post: Don’t Take Chances With Data Or Security — Invest In Battery Backups