It is neither the first, nor will it be the last sensor for the home that we will present. The proposed Clime is based on small sensors placed around the house, to collect information on the temperature or humidity. 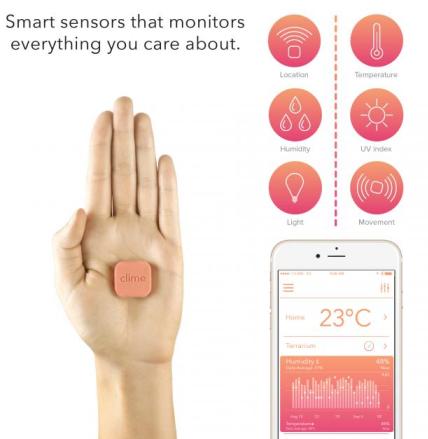 The idea is that we can cover the home at a reasonable price, without making a big investment, but no less rigorous in its measurements. It also committed a design easy to hide or to integrate anywhere.

Another issue is to ensure that the sensors work really well, and find the utility to the matter, probably many of us do not find it at the moment, but there are a lot of potential by little we see examples and utilities. How to detect water leaks, tell us when a plant needs to be watered, notifying that the sun has risen, or even as a security system with elements that move from place, are some of its applications -Polish – developer company puts us some examples:

As one might guess – it’s usually doing this kind of gadgets – Clime is connected to the home network to have information accessible from different devices. Obviously there mobile application to monitor the parameters, we are at home or away.

The strongest of the Clime sensors seems in size, very small, and the ability to adhere to surfaces. In addition to WiFi, connectivity features Bluetooth 4.0, and as for autonomy, its battery gives year and a half year life.

The price of Clime sensors is $24 per unit, higher than its had initially planned – $ 15 – in its campaign financing, but still falls within a moderate expense. Its will be available in early 2015.

Actually there are two prices for the four possible models. $24 for the temperature sensor, and $26 for three other versions, reading the moisture, light and motion, in addition to temperature.