The philosophy of Chromebooks is not precisely to get a super powerful computer in hands, rather, give us just enough to navigate, for a moderate price. But that does not mean that things will improve, such as the HP Chromebook 14. 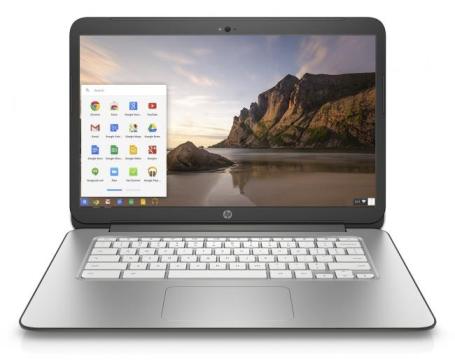 HP’s latest product evolves the previous model – September – on such important issues as the screen, maintaining its size of 14 inches, but the resolution goes up to Full HD. For if it did not have enough with the change, add touch support.

4GB RAM for the Nvidia Tegra K1
The model is known internally with HP Chromebook 14 G3 (14-x050nr), and its main hardware solution with ARM design signed by Nvidia, Tegra K1 specifically a 64-bit – also used on Acer model. It is well equipped with 4GB RAM and 32GB internal memory in SSD format.

In terms of connectivity, expected on a Chromebook, as ac WiFi and Bluetooth 4.0 connectivity. It also have two USB 2.0 ports, one 3.0, microSD card slot and one HDMI output.

We believe that the Chromebook 14 3G is particularly slim, weighs 1.7 pounds and has overall dimensions of 34.3×24.1×1.77 cm. There is room for 37 Wh battery and boasts eight hours of life with a moderate performance.

For specifications we can consider that it is one of the models that more updates will endure Chrome OS, but we still have doubts whether in actual performance is behind the Intel solutions.

The price at which we can see on their official website, in the United States is $440, somewhat higher than usual for these devices, but it is also true that we get a better set. In fact it is one third cost of Google Chromebook Pixel, with specifications to stand up.

2014-12-24
Previous Post: Samsung proposes a camera and an application to improve relations of children with autism
Next Post: Devialet Phantom speakers offer much power in small format, included amplifier