Rethink Robotics lives up to its name and takes a few years trying not see robots in assembly lines in the same way. After Baxter, now comes Sawyer, an evolution of worker robot which is now smaller and more accurate. 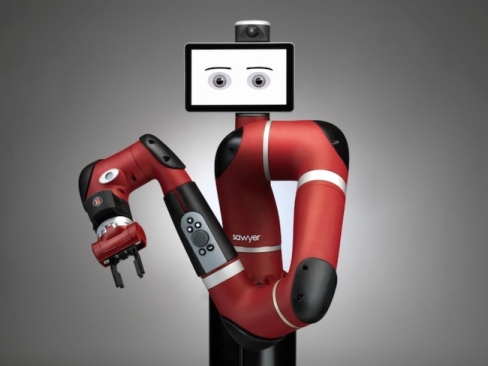 Interestingly that greater accuracy and how easy that is to set up collaborative work of Sawyer in eminently human work environments will enhance that new robot is incorporated into production lines where so far the presence of these robotic elements was not very relevant. From spaces of cross-check of printed circuits to assembly of components.

A robotic arm for precision work
The new actuators provide Sawyer much of the improvements that allow you to tailor new roles in the assembly. With them ensures that the robotic arm is much more precise at the same time it needs less space to work and be mounted.
According to the manufacturer, the new model is ready to perform tasks that until now no other robotic arm was able to offer solutions for automation of work, without sacrificing the security of a free environment machines.

Also gives the different touch is touchscreen that serves as a face, added strange that should help their integration into production lines and environments where the human is the predominant worker. More interesting is that with that screen can be configured easily their work and even adapt quickly through movements that are recorded in real time.

The new Sawyer may begin to see different assembly lines of electronic equipment from summer, at a rate of about $29,000 per head (or better, per arm).

2015-03-26
Previous Post: Microsoft continues to invest in low range, now with Lumia 430
Next Post: Analyze with algorithms how we speak, one of noninvasive methods for detecting Alzheimer