By: editor
In: Health Tech
Tagged: prototype of a smart bandage

A group of researchers from the United Kingdom has presented the first prototype of a smart bandage that becomes fluorescent when in contact with the types of bacteria that commonly cause infections in wounds, which could make life much easier for doctors the time to treat them. 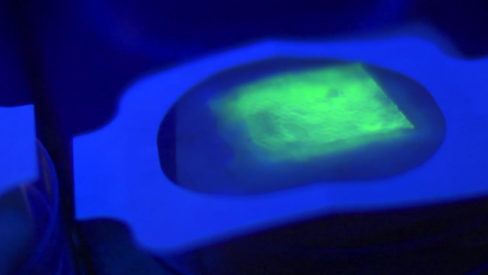 The project is being led by Toby Jenkins, professor of biophysical chemistry at the University of Bath, in collaboration with clinical researchers at a Paediatric Burns Centre at the University of Bristol. Together they have developed a gel containing small capsules that release a nontoxic fluorescent dye that responds to contact with the bacteria.

In this Paediatric Burns Centre there are several children with serious burns that require bulky bandages. Given the possibility that the use of antibiotics can encourage bacteria to become resistant to them, and to prevent infection have to remove bandages causing pain to the children, researchers are developing these smart bandages as an alternative.

Hunting for bacteria
Although all our wounds are colonized by bacteria, usually our immune system is able to deal with them. But there are occasions when these populations of harmful bacteria overgrow for our immune system, at that prompt medical intervention is necessary to avoid infection.

Toby Jenkins believes that the danger comes when the microbes work together generating a viscous substance which creates a thin layer that protects them from the immune system, and that the time these microbes begin to produce toxins. It is then when the new dressing into action. Its outer layer has a number of small capsules that release a dye which emits fluorescence when they are punctured by toxins.

The ultimate goal is to allow doctors to know with time when a wound could be close to become infected, and only then proceed to remove the bandages to treat them. In addition, so the need for antibiotics would be reduced proactively because parents and doctors would know at all times whether or not the child is at risk of infection.

Although not yet been tested on humans, researchers have shown that smart bandage prototype has become fluorescent after a while to come into contact with at least three different species of pathogenic bacteria. This has cost them so that the council of Medical investigation of the United Kingdom rewards them with a million pounds for the next phase of its project, which aims to have this technology ready for the first clinical trials in 2018.