We know and we have seen how the wearables are gaining important ground in the world of technology, focused on solving areas that other devices have failed, this is accomplished mainly because they are developments that we carry with us ourselves, as clothes or accessories for daily use as watches, rings, bracelets, among others. 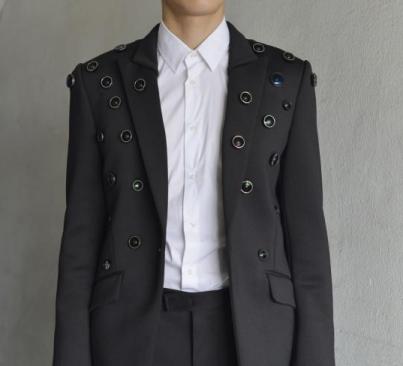 In this field we keep witnesses from the most innovative developments, even the most absurd, but had never seen a jacket full of surveillance cameras, with which you can have 360 degree view and record every single move around.

Personal security taken to a new level
This jacket is the brainchild of Kim Yong Hun and Shin Seung Back, two Japanese developers who in addition to publicize their development focused on personal safety, they want to show how the behavior of a person undergoes a radical change when he knows he is being recorded.

The aposematic Jacket has more than a dozen cameras, which work only four of them; the others are merely decorative; these four cameras are connected to a Raspberry PI plate with a WiFi module and an included rechargeable battery.

In addition, the jacket features a discreet button that when pressed will activate recording of the four cameras and send the panoramic video via WiFi to a public web, of course, the idea is that the button only is pressed in an emergency.

Record to someone and see how it changes your behavior
The really interesting thing about this development is the social part, as their creators state that have taken to the streets to test the operation of the jacket, and thus have realized that people around modify their behavior and sometimes stops making things that might seem suspicious or outlaw.

Of course also the protection element, because if someone is determined to attack or steal, this jacket will think twice, because it is something similar to what happens with wearing fake surveillance cameras that only incorporate a LED, in this case the thief does not know if the cameras is activated and in many cases prefer not to investigate.

The development of this jacket is just a prototype and there are no plans yet to put it on sale, but its creators do not rule out the possibility of doing so in the near future, especially because it’s have to perfect the design and cut costs, but to the moment we are, apparently, to a very good idea that can lead to other inventions.

2014-12-19
Previous Post: Sony looks a new opportunity in the collective funding and this is his new project
Next Post: Skype Translator intended that the language is not a barrier to speak at a distance